OK I know that Emley Moor wasn’t part of the Tour de France Grand Depart, but it is a hill climb (which is one of the definitions of Côte) so I’m sticking with it. Plus the Tour de France is still on at the moment so it’s still relevant and OK to mention it as many times as possible in my posts in the vain hope that it may bring more readers!

I fancied something different this time out, rather than going towards the windmills I wanted to go towards the other side of the valley where I live, so chose a route that would take me over Emley Moor past the mast. To do this I would need to ride past and around it an approach from behind. This route includes a large proportion of the Scissett Triathlon bike ride, a route I had ridden once previously, earlier in the year.

The odd thing about this route is that the first mile you ride away from the mast, with your back to it, going out towards the windmills. This is the only way to get out of the village without heading down towards the mast and for me gives an extra couple of miles onto the ride.

Once up high enough the road then descends for a couple of fast easy miles, allowing me to generate some speed though a couple of villages heading towards where the Triathlon course starts.

After that it is up towards the mast from behind. The run up to the mast is all uphill so I stopped at the bottom for a breather, the road from the Triathlon start is fairly flat so you can pedal hard and fast for a few miles, in top gear, without stopping or slowing. Knowing what was coming, the long drag up to the mast, made me think a quick breather was going to be a good idea.

Riding up towards the mast is just a long slog, something that I didn’t really enjoy that much, so much so I had to stop close to the top for another quick rest. Not something l like to do, especially as I knew that I would stop next to the mast anyway.

Once over the top there is an easy ride back down the hill towards home. The wind always blows in your face on the decent so it can be difficult to get a huge amount of speed up on here.

An enjoyable ride if not remarkable or very interesting! The most remarkable part of this ride was the amount of Strava segments I got PBs on. To be fair I have only been this way once before but still to get 26 PBs and 3 second best efforts is a really top effort.

Like many people I have spent the last few weekends looking out of the window in the hope that the weather will break a bit and I can get out on the bike. An aborted attempt a couple of weeks ago left me very aware that the elements can change very quickly in the hills and I shouldn’t take anything for granted especially with the UK weather.

Training for the triathlon has been slow. Actually it has been pretty much non-existent over the past month since I went in for an op in mid January. It’s now mid February and up until this post I had ridden a total of 5 miles (2.5 of those downhill with a following wind), thought about going swimming, to the point where I have the timetables of the local swimming pools stuck up on the wall with the lane swimming times highlighted. Running just hasn’t crossed my mind. So to say it isn’t going well is a bit of an understatement.

Triathlon number one is on the 8th June 2014 and is a ‘sprint’ event. I won’t be sprinting, just competing and completing will be enough for me. I’d like to not come last but if my last ride is anything to go by I will defiantly end up somewhere near the back. I need to get some training in and a break in the weather on Sunday provided the perfect opportunity to start.

With the weather better than it had been I decided to try the triathlon course out. I never had any doubt that I could ride the distance – 16km as I have easily done that over the past few months, the only question was the route. I know the area well as it’s not too far from where I live, the route however, uses roads that I rarely drive on as it’s not on my way anywhere.

Although close to where I live, the start point of the bike course is 6 miles away, after the usual 1 mile ride uphill to get anywhere the rest of the ride to the start is downhill or on the flat – not many roads around here that are flat!

I didn’t stop to admire the starting point, choosing to keep up my momentum and ride out on the flat for around 3km before turning and facing the long climb up towards Emley Moor mast. This is a bit of a killer climb with little flat and only one very small downhill section to catch your breath on. It’s 3 miles long, a category 4 climb with an average grade of 3% and an elevation gain of 524ft. None of this is particularly hard, especially for the numerous cyclists who past me on the way up (all of them on road bikes not mountain bikes like me).

The one thing I have noticed whilst out and about is how much of a community cycling is. Everyone is so polite, with a morning here, a hello there and the odd thanks thrown in when someone passes you. OK some don’t speak, some people just nod or pretend not to have seen you – difficult when I wear a bright yellow jacket and red Camelbak. The runners often say hello too, all fitness freaks together.

At the summit of the climb stands the mast itself. Here was a ride of two halves. In front of me dark rain clouds and menacing skies, behind me sunshine and blue skies – pity I was heading home towards the rain! I needed to have a quick rest as my knee was feeling pretty sore and I needed to stop. Not for long, just long enough to take some pictures and stand up for a couple of minutes.

Over the past couple of rides I’d noticed some discomfort in my left knee when I applied pressure on the pedal. This got much worse whilst trying to ride up the hill towards Emley (the mast isn’t actually in Emley, a small village a mile or so further down the hill) and continued to get worse the longer I went on. With the rest-bite of riding down the hill towards home the pain subsided although as the wind had picked up on the decent I found myself having to pedal just to keep moving which didn’t help. The time it took to complete this ride indicate that I was hampered by my knee, hopefully getting some strength training done and building up the muscle above the knee should help.

By this point I was in agony with the knee, but I had kind of planned the route before hand so wanted to complete what I set out to do. I’ve been on these roads before so knew I was struggling as I was going extremely slowly in a very low gear. But I had to do it. Not because I wanted extra distance, although always nice, but because I wanted to get back to one of my favuorite decents, down the road I cycle up on my way out. It’s not a long road, just about a mile, it’s not that steep, but you can get good speed up and I know I’m nearly home.

So I did the majority of the course, I went much further than the course itself, so at least I know that I can complete that part of the triathlon. All I need to do is start with a swim and end it with the dreaded run!

The base of the mast with the sun peeping through

Looking across the Wakefield with the mast behind.

Like many other people, I use Strava to log how far I ride and how long it takes. This is great when I only ride on the road, but I ride a mountain bike and every now and again I like to use it for what it was designed for and what I really bought it for and go off-road. What Strava can’t take into account is the amount or depth of mud you have to wade through when you go off-road, neither does it take into account the wind speed, but I guess that’s the same for everyone.

Off road is so much more fun and much tougher than riding in the road, it also gives a sense of adventure you just don’t get anywhere else. It may be true that when you are on the road you don’t risk life and limb ducking under tree branches to the left whilst riding across slippery cobbles, trying not to drop down a ditch on the right, but hey its worth it!

For this ride I went out with a friend, one of the two I started riding with in June. This is probably why we went off-road in the first place, don’t think he’s much of a ride round the windmills type of guy.

Around here if you want to ride off-road you have to go more towards Emley Moor than away from it, that means you have to go down into the valley then back up towards the mast.

You can get quite close to the base of the Mast, but can no longer go up it for health and safety reasons. I’m sure the view from there is stunning as you can see back towards the windmills – Sheffield and Manchester, along with the other side of the hill towards Wakefield and beyond.

The view below is looking back towards the windmills which I thought made a good contrast to my usual photos that have or look towards the mast. The windmills are to the right on the horizon and not the one you can see in the centre right!

The windmills in the distance from Emley Moor Mast

I also took a quick picture of myself for the first time on a ride, covered in a bit of mud from the off-road bits, very wet out and very windy. The problem we had coming back down from the mast (we rode around up there for a while too, not just up and back down) was that the wind had picked up and was blowing straight into our faces. So even though we were riding downhill we had to pedal hard just to keep moving, the gusts where quite scary too, almost knocking me off a couple of times. 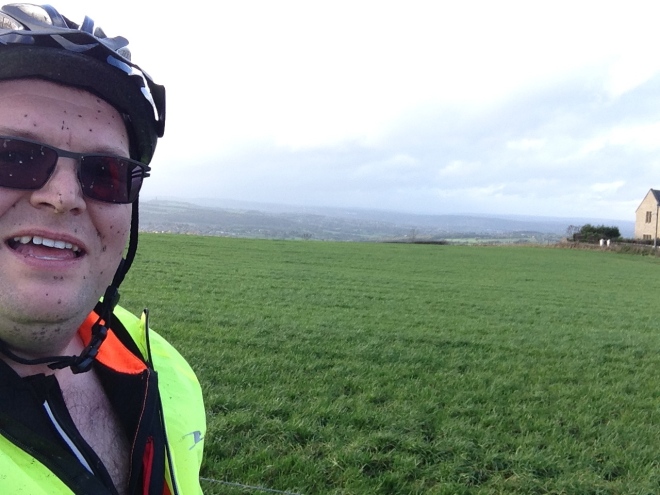 Me covered in a bit of mud

If you squint you can just about see Castle Hill just outside Huddersfield next to my Sunglasses.

So although it’s not all about the time or the distance, here are the details anyway:

As we move into November I think I will take up jogging in my quest to compete in my first (and probably last) triathlon in 2014.